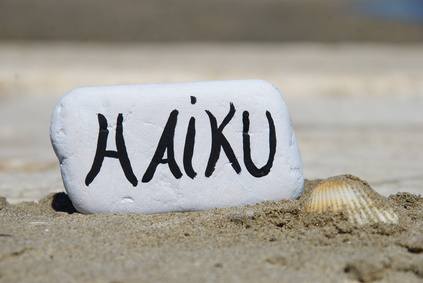 Hebrew and Haiku – Poetry For The Ages

Ever had one of those conversations about Bible interpretation when somebody accuses someone else of not taking scripture seriously? Me neither.

While I wish that was the case, I am finding myself more and more in the middle of these literal vs. metaphorical vs. poetical saw-offs. It might be happening more often because I’ve been spending time investigating how certain controversial Bible bits have been interpreted over the ages. And then I use my outside voice to ponder my findings. That’s when the trouble starts.

For example, did you know that even before Jesus was born (2 centuries before) Hebrew scholars were already arguing about whether or not Adam was a real person? This isn’t a new battle. The only difference between the way ancient jewish scholars and many Christians debate this issue is that the old school experts never accused the other side of heresy. Nobody started collecting firewood and reached for the lighter fluid.

Torah (or Old Testament, to those of us familiar with everything after the book of Malachi) was pushed and prodded from opposing angles to discover how it best fit with real world knowledge. It was considered a part of practicing one’s faith, if you were a Hebrew theologian, to struggle with the text and try to make sense of it in light of the latest news on the street.

Now those old Hebrews might have had an easier time interpreting scripture than we do simply because they knew how to read and write old hebrew. If that seems like an unfair advantage it is. They could pick up on nuances of the writing as they processed the text.

To illustrate how this might have worked, I will nonchalantly drop a haiku right into the middle of this paragraph:

If you’re familiar with the 5-7-5 syllabic structure of this ancient Japanese art form you recognize it immediately. Now was that poetic or literal? And why am i suddenly in the mood for sushi? And once we start debating whether ‘moved’ refers to a physical act or an emotional one, the debate could really heat up. Did the reader, in attempting to ‘literally’ pick up a poem that is apparently leaning at a non-perpendicular angle, find himself in motion? Did said poem actually ambulate the reader’s body out of it’s pre-poetic space on the cartesian grid and place it down somewhere else? Perhaps somewhere better?  Is ‘poetic slant’ a metaphor for “slippery slope”? And away we go. ( Note: if you were moved emotionally by that Haiku you need to get out more.)

Literal in this context IS poetic, which explains why, when i am accused of not reading Genesis chapter one literally, I have been known to reply with a whiny “What do you mean by the word literal?”

Literal simply means that the reader understands the text in the same way the original audience did. Of course it’s not as easy as picking up an English translation twenty five centuries later and reading it like you would People Magazine. This doesn’t mean I’ve figured Genesis out. What this does mean is that the conversation, no matter how much fun it is, shouldn’t result in anyone losing an eye.

I don’t think we show the proper respect for scripture or each other until we are prepared to do the homework. Torah For Dummies anyone?